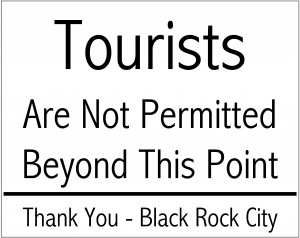 I got the inspiration to post this sign from a snapshot on the wall of the cubicle next to mine in my default world job. It’s a picture of a sign in front of the Woolworth Building in New York City. 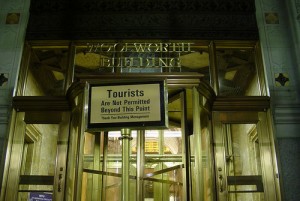 I’m amused at how the meaning of the sign shifts depending on it’s physical context. Outside of a building in New York City, it’s an off-putting warning to the innocently curious. Within the city limits of Black Rock City, it’s a sly reminder of the principle of Participation (one of the ten principles of Burning Man).

Participation
Our community is committed to a radically participatory ethic. We believe that transformative change, whether in the individual or in society, can occur only through the medium of deeply personal participation. We achieve being through doing. Everyone is invited to work. Everyone is invited to play. We make the world real through actions that open the heart.

There are no tourists in Black Rock City — only participants. Though sometimes we all need a reminder.

This site uses Akismet to reduce spam. Learn how your comment data is processed.